I am reposting my old, lost in “translation” recipe. So many of my recipes did not make it when I made a transfer last year so I will be slowly but surely adding them back one by one.

I had this pepper dish for a while on my mind. It is also a delicious side dish that I grew up eating, however, my husband actually refused to taste it for a few years.

He listened to my idea, and said in a little sarcastic tone of voice: “Really! Are you actually going to post peppers on your blog?”

My men always liked his peppers raw. However, when it comes to cooked peppers you would find it on the side of his plate.

Without even thinking I went to the kitchen to prepare my peppers. Yes, I felt disappointed and little upset about what he said.

Cooking is very therapeutic for me so I tried to erase completely what he said earlier.

When the sweet peppers and garlic hit that skillet with a bit of olive oil, you can smell the aroma wrapping my whole kitchen.

Once I poured the sauce in and started to slowly stir, I think my neighborhood was infused with pepper-garlic flavor. Who doesn’t like that aroma?

I set up everything for the photo-shoot, but with a corner of my eye, I could see my Nebs slowly walking toward the kitchen. You see, he did not notice that I can see him stretching on his toes trying to figure out what smells so good.

Finally, I finished and he said no, I will not eat that. It’s like trying to convince two-year-old to peas.

I dipped the bread in the rich and creamy garlicky sauce and pushed it in his mouth like he was 2 years old and refusing to eat his peas.

All you can see is confusion in those big brown eyes. He was not expecting the taste to be an amazing explosion of the flavor playing with his taste buds.

Well, I had to take my plate because he took this whole skillet. I ended up doing one more round of these roasted peppers with creamy garlic sauce.

However, the second time he was in the kitchen watching me making this simple dish.

This recipe is flavorful, very tasty and it goes beautifully if you pair it with something from the grill.

Actually, I like them spicier, for example, hot banana peppers or the addition of one chili pepper mixed with the sweet ones.

My mouth is watering just by thinking about it! If you love peppers as much as I do, then you got to try it!

It’s really very simple and I tried to simplify the recipe as much as I could so you won’t be able to make any mistakes.

These peppers are amazing with my Pork Schnitzels

If you make my Pan-Roasted Peppers with Garlic Infused Sauce or another recipe please tag me. On Instagram @sandraseasycooking.

You can use any peppers, sweet or spice and of course any color that you desire. However, if you use regular sized peppers than you will need to slice them at least in quarters and take the seeds out, and more time until they can get softer.

You do NOT have to use any Crushed red pepper or anything spicy if you cannot handle or don’t like spicy food. It is optional, and you are in control how much is too much.

If you don’t have half and half or heavy whipped cream just use milk. It works fine with milk because when you are using roux it will become creamy. 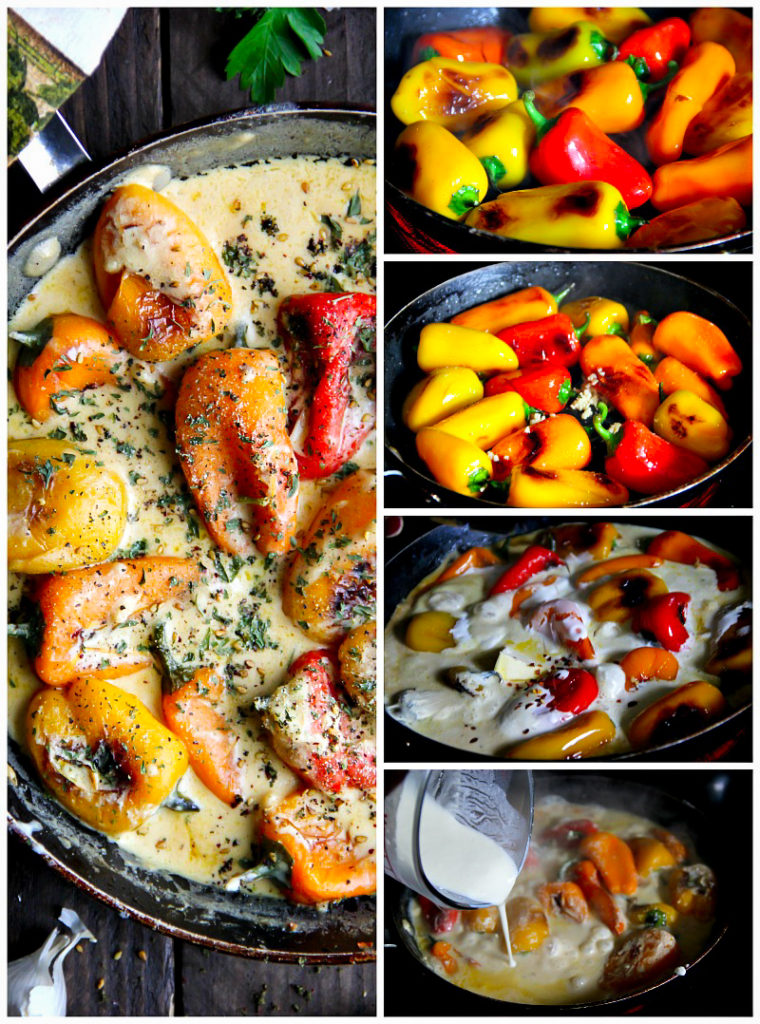 Very fun! Adapted into a steak sauce as we had some large gifted sweet peppers [1 large, 4 oz, pepper, half the sauce]. My husband also thinks he doesn’t like peppers but ate it up!