You may know this bread as a Soda Bread. This quick Irish soda bread is one of the traditional bread in Ireland.

Some girls dream of Paris, and me… Well, The Ring of Kerry. You see, Ireland is on my top 5 list of must-visit destinations. The scenery is just so breathtaking, and food right up my alley.

OK! Back to reality and this tasty bread. Soda bread is also traditional in Serbia as well as Southeastern Europe and I assume many other countries, of course.

Soda bread is probably the easiest bread, the basics of the basics. I simply cannot see anybody being unsuccessful in making it. The nontraditional person, like myself, I know quite a lot about traditions.

Maybe because I moved so much and met many amazing people with of course different backgrounds.

Then I got really interested in comparing food, people and traditions to one that I grew up with. I came to realize how same, but different we all are, even if we live in the same region.

It all depends on the household tradition that might be passed on from generation to generation.

History is something that I love digging into. Although, I am aware that some facts could be based on legends and myths.

However, it’s like connecting dots or putting together a puzzle in finding the right answer, or at least the closest one.

I think I mentioned that before in more than one post, however, it is fascinating to find roots where certain dishes coming from.

How people are preparing it from one country to the other. I could go on and on about this topic, but I will try to keep it as brief as possible.

The bread was, and it will always be a staple of most European households. It is eaten with every meal. To be quite honest, I feel like a meal is not a meal without bread.

In Serbia, Soda bread or pogača (po-ga-cha) have been in households, some say as early as the Medieval period.

Well, I believe that’s not quite true because baking soda was actually introduced to Europe around the mid 19th century.

Just like in Ireland, Serbs and people of Orthodox religion traditionally cut the cross on top of the bread with a knife before baking it.

Superstitious beliefs are that it will protect the household from evil if the cross is cut at the top.

There are many rules and rituals about this particular bread around Orthodox Christmas, which falls on January 7th, following the Gregorian calendar.

It is eaten on Christmas Day, and if I go through all the rituals it would take some time to explain everything.

Here is a fun fact: Lady of the house would place a coin in the bread dough before baking and whoever finds it on a Christmas day, it was believed that fortunate person will have good luck throughout the year.

Head of the household would break the bread (it’s never cut with the knife) and meant to be shared among family, and friends, especially during celebrations.

Watch my video on youtube how to make: IRISH SODA BREAD

Thank you so much!

An egg is optional! You can use it, but it is not necessary. I think it is just personal preference.

You may ad seeds on top of the bread before baking. It tastes great with it! 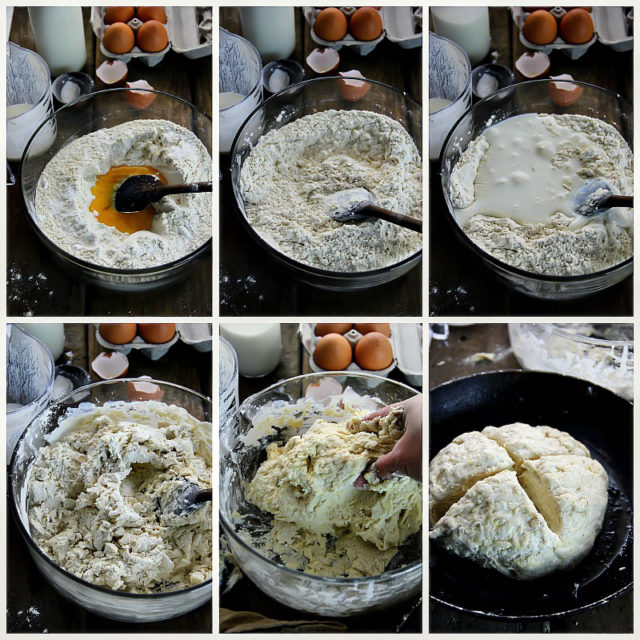 This was so easy and so delicious!! My new go to homemade bread

Yesss!!! Thank you for letting me know!