This breaded cutlet or schnitzel is a quite popular dish in Serbia and around the world. It is also called Karadjordjeva schnitzel. It is named after a prince Karadjordje, also known as Black George

This was created by a Yugoslavian president’s personal chef for nearly a quarter of the century (1956-1980). Chef of many prestigious international hotels and more than several times culinary champion, locally and internationally.

Someone who made twists on old traditional dishes, or shall I say made forgotten recipes in a more modern way. As well as a recipe developer, culinary master and professor, chef Milovan (Mića) Stojanović.

After digging around, trying to find the face of a person behind this dish, I found the interview with the men himself. Pretty much all my questions were answered in that interview that I read and then watched. I couldn’t be happier to share some things with you all as well as this delicious dish.

How did this famous dish, Karadjordje schnitzel was created?

“When I taught classes as an assistant in the restaurant called Golf in 1956, a lady made an order and asked for a Chicken Kiev, at that moment I thought “where did you found me?”, Kiev cutlet is made from chicken and butter, and I did not have either. (“Where did you find me?” is an expression)

I asked the waiter: “Who the hell is that asking for this dish?”

He tells me: “A host from Radio Belgrade, on a meeting, reading water level on the Russian language”. I said to myself “I’ll make her a Serbian dish that will blow her out of her mind, and she will forget all about her Chicken Kiev”.

But I really didn’t know what I was making.
In order not to embarrass the restaurant, I took a steak and sour cream and made now known as Karadjordje schnitzel. She liked the dish so much that she requested a recipe immediately.

The next day I found out who this woman was. She was Tamara Broz, Tito’s daughter in law (president at the time).”

He served breaded cutlet with tartar sauce spreads on top. Which he garnished with lemon slices and red pepper, symbolizing an emblem color of Karadjordje.

Then added French fries, and salad on the side along with the rolled cutlet. Originally, Chef Mica made it only with the veal and sour cream.

However, since then we can find so many different takes and variations of the same dish. You can find it with smoked ham, or prosciutto, cheese and pickles and without it, fried or baked, made with chicken or pork, etc.

I just remember eating it this way a long time ago when I visited one city. I have absolutely in love the first time I’ve tried Karadjordjeva schnitzel.

Before judging and making faces, thinking about a pickle in the roll, trust me it works so perfectly together. I know about rolling eyes. My kids, as well as husband, did it too, but when you try it everything melts in your mouth. You only wish to eat some more.

the end, you do not have to add a pickle if you really dislike it, but at least try eating it with this steak roll, and you will know what I am talking about.

The best part is that you can make it with Pork or Chicken too, you just have to make sure that the slices are thinly cut/sliced and ready to be rolled. Either way, you go, I am almost certain that you will fall in love with a Serbian breaded rolled schnitzel as much as my family did when I made it for them the first time

My version is simple as any other and it’s not deep fried. Furthermore, I seared or pan-fried this roll for a few minutes with a little oil, on a medium high temperature, just to make it light golden in color, then I baked it.

So, let us Rock’n’Roll, folks. Let me show ya how to make this delicious cutlet. Serbian Breaded Rolled Cutlet. I will ADD ingredients for ONE ROLL. For more, of course, you would have to go according to how many people you’re serving. 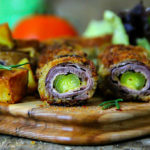 Click here to cancel reply.
Thank you for visiting my blog!