Korean Ox Bone Soup {Seolleongtang} is a broth made from ox bones (mostly leg bones), brisket but other meat cuts could be added, too.

It is a staple of Korean households and although it’s a year-round type of soup, it’s especially popular of course during a long cold winter. Origin of this Ox bone soup is Seoul, and you can read more on Wikipedia.

Why am I make it at peak of the summer, you might ask? Simply because my body was really craving this kind of soup due to a lack of sleep and tiredness-so when I am feeling like that, the broth is my best friend because I can just reheat it and eat it. I do make it in large amounts because I feel like long cooking time was well worth it.

Oxtail and ox bone soups are almost the same- not only that your body feels better but it also comforting your soul.

Ox bone soup/broth is extremely rich with many vitamins, minerals, and antioxidants (especially calcium, magnesium and phosphorous, which are of course essential for bone health) but most importantly, bone broth is also particularly healthy because it does hold two amino acids- proline and glycine.

I enjoyed and savor this soup with kimchi and rice on the side. You can also pair it with different kimchi however my favorite is from napa cabbage, preferably a few months old because it adds so much of flavor when you eat it especially with any type of soup.

Making Seolleongtang is rather simple with few ingredients but it does take a long time to cook if you want to achieve that white milky color from bones and bone marrow.

Also, you might want to use a pressure cooker because you would reduce cooking time in half, then again I love slowly cooked broths bubbling on my stove even in the summertime. 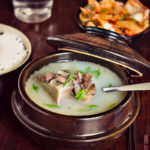 Save the meat for serving it with the soup. You can keep it plain and just slice it but Click here if you would like to see my spicy version. You can add noodles in the soup and/or chili peppers. Salt and pepper is added at the table when the soup is served and not while cooking, but if you feel like seasoning it while cooking you can add if you desire. You can cook this soup until it becomes whitish but you can cook it for much longer than that. You do not have to serve the soup with the bones in the bowl. I added because of the picture. If you would like to see easy to follow video click here You can keep it in the freezer safe dish for up to a month, just preheat when you eating and also it’s great for adding it in the stews. It is slow cooking soup/ broth but you are making it for more than 4 servings so you can have it for later.

[…] Don’t be fooled, this seemingly mild-looking soup is an explosion of beefy meaty goodness in your mouth.Image source: https://www.sandraseasycooking.com/2013/08/korean-ox-bone-soup.html […]

Not only is this soup healthy, it is also delicious!